My name is Kenneth Sledge. When I started here in July 2015, I was…with no hope waiting for death to come. I was 535 lbs and unable to get out of bed. Since coming here, I have had weight loss surgery and lost 114 lbs, but how I did it was most important. I was too large for the machines, and the pool was all I had. The pool has become home and …family.”

Getting to the YMCA Kerasotes facility early to exercise in the pool has become a daily routine for Kenneth, who will often take multiple water fitness classes in one day. What seems like a lot of exercise for most, has become a God-send for Kenneth.

Before Kenneth started water fitness at the YMCA in July of 2015, he felt hopeless. He weighed 535lbs and was unable to get out of bed. He felt like he was just waiting for death to come.

He suffered the loss of his wife ten years earlier to cancer. Food had become his best friend.

Because of his weight, his knees were in bad shape. His doctor sent him to the staff at Memorial Sports Care for physical therapy. As soon as they met Kenneth, they urged him to get into the water.

Since Kenneth was too large for the machines, the pool was the only choice he had. He would walk and jog in the therapy pool and do exercises his therapist taught him. Soon, he began meeting others and decided to try water fitness classes. Now he takes water aerobics, water fitness for arthritis, and water Zumba, and will spend 4-4.5 hours a day at the YMCA. We couldn’t help but to ask how he felt with this sudden onslaught of exercise! He admitted that in the beginning he was tired and sore, but was driven to keep going. He had to change.

Eventually, Kenneth was in good enough shape to be approved for the weight loss surgery he wanted! Peoria Surgical Group performed the surgery, and he is down 223 lbs. He now gets about without his walker, something he used to depend on daily. He never uses motorized carts anymore.

Today, his health is better than ever. Most of his ailments are in remission or completely gone. His Type II diabetes is completely under control and no longer an affliction, his blood pressure is down, and his cholesterol is down. Most touchingly, he explains, “What people don’t understand is that the Y is as mentally therapeutic as it is physically. A lot of people come in here and talk to each other for hours. It extends their lives.” 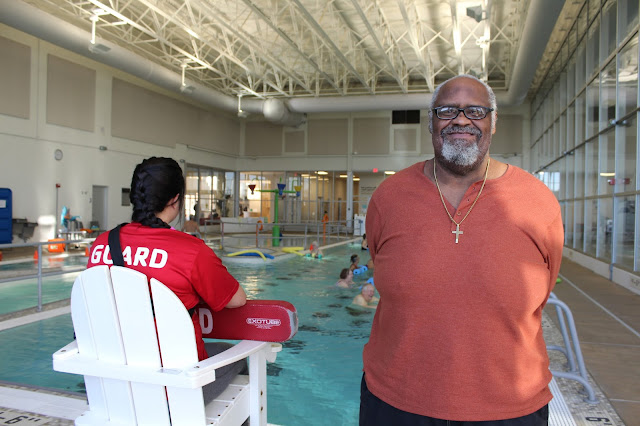 Kenneth went on to speak about the psychological effects of obesity. Since getting healthier, his entire perspective has changed. People no longer stare at him when he walks into a room. He used to be very limited in the places he went and only visited one grocery store where he felt comfortable. Not feeling singled out has made an enormous difference to his psyche. Now, he goes anywhere he wants.

Kenneth thanks the Y for helping him overhaul his lifestyle and alter his health. He praises the staff and members for being so motivational and keeping him accountable. If he doesn’t show up, they will ask why. They would even double check and make sure he had a way to get to and from the YMCA! He has found community and comradery in his new YMCA family and like so many others, looks forward to his visit every day. He says, “This is home. That other place is just where I pay rent.”

Kenneth has been so impressed and thankful for the YMCA, he started working for the YMCA.  Every Tuesday night you can find Kenneth in the Kid Watch area at Kerasotes entertaining the kids at Kerasotes.

Congratulations Kenneth, and thank you for inspiring us with your ambition, courage, and heart. We are so proud to have you in our YMCA family!