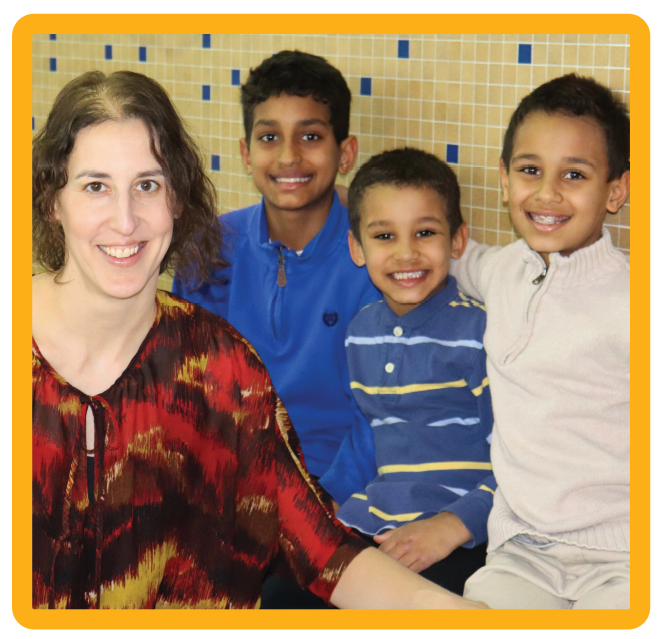 Heather and Tony are the parents of three boys, Jeramy (11), Jonah (8), and Joel (6). They joined the YMCA to take advantage of YMCA youth programs. As you can imagine, keeping three young boys busy and active can be challenging and expensive. They learned quickly they received more than just a YMCA membership. They became part of a community of people who lift, teach and inspire.

In 2015 Heather signed Jeramy up for swim lessons at the YMCA. She would drop off the younger boys in Child Watch and take Jeramy to his lesson. She used the Y Child Watch so frequently that the staff convinced Heather to apply for a job. With a background in teaching, this was perfect for Heather. She could bring her kids to work, earn a little money, and would be able to work with children.

A year later, Heather and her husband were faced with a difficult decision. They couldn’t afford to sign all the boys up for swim lessons. She said, “I stood at the Downtown front desk and wondered which of the three would get to participate.” She said it was heartbreaking to have to make that decision, so she applied for
a Strong Kids scholarship. This allowed for all three of her
boys to participate and it gave her a greater appreciation of how
the Strong Kids fund impacts families.

Heather says the YMCA is like family to her and her children. In 2018 she accepted the position as the Downtown child watch coordinator. She is grateful for the opportunity this position provides, and the way the YMCA staff is so accepting of her children. She is impressed with her co-workers and has learned so much from them. She says, “They model how to be good leaders and how to do it with compassion.” She went on to say, “I am inspired by these women and am in awe at how they balance being a mom, wife and employee.” Sarah Brewer, Heather’s supervisor, says, “Heather shares her children with her YMCA family, and they bring a smile to so many faces. I look forward to one of them popping around my door anytime I know Heather is in the building. I can’t imagine the YMCA without Heather and her children. “

Heather’s boys have enjoyed many of the different programs the YMCA has to offer. They participate in swimming, baseball, basketball, soccer, and summer camp. She believes that volunteering is also an important benefit of having kids in YMCA programs. For the past two years, she has been a volunteer coach for Joel’s and Jonah’s basketball team. Heather says, “My boys wouldn’t be able to participate in these sports without the Strong Kids scholarship program.” She has become an ambassador for the Strong Kids fund as she knows firsthand the impact it has on families. She says, “The Strong Kids fund provides far more than just a membership. It’s an opportunity to help a community of citizens in need.”